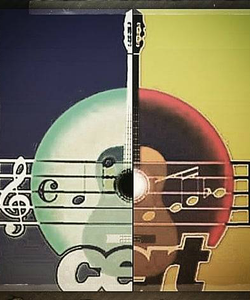 Born in Caracas-Venezuela on October 17, 1972, he is the forerunner of the first franchise network of guitar orchestras in the world, the Latin American System of Guitar Orchestras (SLOG), Founder and main promoter of the Federation of Guitar Orchestras (FEDOGUIT), and creator of the Company of Edition and Representation of Talents CERT Producciones CA, the first publishing company of cultural discs in the world based on its statutes to the charitable support of the health sector.

Inventor of educational board games: "Global Guitars", "The Mentor", and "Extreme Politics"; author of the books: The theory of expansive control of temporal reality "CERT Theory"; “Sistema Kungfúsica” (Between music and martial arts), and the series of gymnastic exercise guides for guitarists “Guía Virtuosi”, being recognized for his techniques as a creative vanguard guitarist setting a new precedent with the School of the Plectrodedo. His music has been constantly performed by artists from different countries, with more than a thousand works in his catalog that make him one of the most prolific guitar composers in the world.

He was a member of the Intermezzo Duo together with the teacher and forerunner of the School of classical mandolin in Venezuela, Professor Iván Adler. He has twelve record productions, ten of them with works of his complete authorship. Evaluator certified by the company Yamaha Musical de Venezuela-Japan in Latin America. He has given workshops at the University of Carabobo on guitar orchestra developments.

He was part of the committee of composers of the televised series "Visual Creators of Venezuela" (Seen by Tele Sur) and from CERT Producciones directed the project "Documentary Music" on facts and characters in history to support schools. Invited by the Austrian composer Franz Kraler and the founder of the "Amadís" Orchestra, Jesús Ardila to the Liendz Festival (Austria-Italy).
His work has been disseminated in the press, radio and TV, in countries such as Spain, Austria, USA, Belgium and France and has been incorporated into different degree theses, two of which stand out at the Francisco José de Caldas District University in Bogotá- Colombia, the first as a composer and educator of integral guitarists, thesis of the graduate in music Leila Castañeda and the second, on her work as one of the fundamental pillars of the current development of guitar orchestras in the continent, of the lawyer Ricardo Trujillo.

Among the honors received are his appointment with the teacher Iván Adler as "Distinguished Visitor" by the City Council of the State of Táchira (Venezuela) and the inclusion of his work "For Him Soul" on the website of "Artists for Human Rights" certified in Miami. He is currently recording the program for Web Television “Guitarra Global”. Produced by CERT Producciones C.A. and Zamurillo Films; An educational work on the development of the Latin American System of Guitar Orchestras, also with the collaboration of the Spanish producer SMILE TV, actors, singers and models from Europe and America in the official videos of their record productions.

With the School of the Plectrodedo, his work has expanded to different Academic Spaces in different geographical regions of the world.
Four seasons. Summer (3rd movement)

Flight of the Bumblebee

Suite: The Story of a Grain of Wheat

Sleep Swallow Sleep. Second movement of the "Little Suite of the Swallows"

The Nest. First movement of the "Little Suite of Swallows"

All guitar arrangements by the author Carlos Reyes (14)