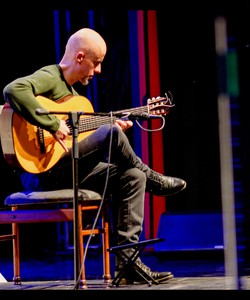 Hello dear friends!
I am Fred Carrilho - guitarist (Classical, Flamenco, Brazilian Jazz and Jazz), composer and arranger from Sunny Brazil!
I am pleased to present my compositions and arrangements to you! I, humbly, invite you to read a little of my biography on music.

"Noted for integrating in a unique way the universe of classical, jazz and brazilian music, Mr. Carrilho establishes 'a new paradigm for XXI century contemporary art', being one of most original and peculiar musician of his generation from Brazil. The aesthetic fusion between music and mathematics, gesture, color and soul, reflects the crystallization and deep expression of his spirit in your Life and Art: recognition and confession before the essence and glory of God to whom he dedicates all his work".

Recently Mr Carrilho has recorded his new album recording. The double CD titled "UNCTION OUVERTURE" - for Guitar Solo, will be released soon. This is a unique authorial art music work; the whole compact disc recording will contain about 30 tracks and almost 100 minutes long.

“The Fred Carrilho & Hong Kong Guitar Orchestra in Concert has presenting a solo concert with Mr Carrilho, where he performed his compositions and most traditional pieces of the Brazilian Guitar such as Heitor Villa-Lobos, João Pernambuco, Pixinguinha, Américo Jacomino, Baden Powell, Tom Jobim, among others. On the same venue was performed in world premiered the EVENTVM VI for Guitar Orchestra and the unique arrangement and performance of Bachiana Brasileira N.5 by Heitor Villa-Lobos – a singular and rare moment where Mr Carrilho and the Hong Kong Guitar Ensemble has estabilished a unique music project cooperation between Western and Eastern Cultures and also a music concert made and performed on the XXIth Century by musicians from this age.”

During Antonio Carlos Gomes Festival 2015, Mr Carrilho performed a Guitar Concert with his guitar music works and arrangements of some of the most important and well-known musical works of Brazilian composer. The arrangements for guitar were specially prepared for celebration concert in honor of Carlos Gomes. Among the works to be presented are IL Guarani [‘MY LAND’ Fantasy by Fred Carrilho after themes from the Opera]. The concert always takes place in September, Campinas during the month Carlos Gomes, the birthplace of the composer, and is a major cultural and artistic events organized by the Culture Department of City Hall of Campinas and Campinas Academy of Arts and Letters (ACLA).
New single CD released in 2015: ‘Amazing Grace’ for acoustic guitar – arrangement and recording by Fred Carrilho.

The Piece EVENTVM V for Percussion Duo, was awarded by the Brazilian Deparment of Culture on the Classical Composition Contest 2014/2015 promoted by FUNARTE (National Arts Foundation). The world premiere will take place in October 2015 during the XXIth Biennial Festival of Contemporary Music at the Cecília Meireles, in Rio de Janeiro, Brazil.

The piece BRASILESSÊNCIA was awarded in the Netherlands in the contest sponsored by NIEUW ENSEMBLE (BAMDialogue project: Brazil&Amsterdam dialogue) and premiered in Amsterdam during the Gaudeamus Musik Week (one of the main events in world contemporary music) at Muziekgebouw Hall. The composition had a great impact and success by the public and by internationally acclaimed critics; and by virtue of the award, the score is now part of the collection of the Music Center the Netherlands.

Mr Carrilho has performed in Festival such as Guitar Fest in Girona at Spain, Brandeburg JazzFest in Germany, Oregon Bach Festival, Brazilian Biennial Music Festival and MASP {Art Museum of Sao Paulo} Guitar Fest.
The DVD “Hino do Corinthians“ for classical guitar is a tribute to the Sport Club Corinthians Paulista, during celebration for the Centennial Anniversary Foundation of the
Sport Club. The arrangement, specially composed for the occasion, uses the peculiar language of classical music integrating it with elements of popular music.

Awarded at the XIVth Biennial Festival of Contemporary Music promoted by FUNARTE (National Arts Foundation), Department of Culture of Brazil, with the work “O Despertar do Anjo” [“The Awakening of Angel”] for Guitar Duo. Besides the production of compositions for this chamber music training, he also maintained a musical activity as a musician with Duo Guitar as Fred Carrilho&Henrique Pinto.

Mr Carrilho was a writer, arranger and transcriber of the magazine Cover Guitarra with distribution nationwide in countries such as Japan, United States and Portugal, where he presented the column “The History of the Guitar and Its Evolution”. He was also a writer for the magazine GuitarPró where he presented works, arrangements and articles for guitar music.
He Presented the “Interactive Musical Composition to Generalized Distribution based on Stochastic Process” on the Iannis Xenakis International Symposium organized by the University of Athens, Greece in association with the University of Montpellier 3 ( University Institute of France ) and Stochastic Methods as a Tool for Musical Composition.

The piece PROFUSÃO5 (Toccata) for Percussion Quartet was premiered at the XVII Biennial of Contemporary Brazilian Music by the DINAMO Percussion Quartet. The work achieved great success by public and international critics:
“PROFUSÃO5 [Toccata] by Frederick Carrilho closed the evening with a bang, skillfully integrating percussion elements from popular music into a clearly and structured large-scale work, virtuous, and extremely enjoyable.” {Opera Today Magazine}.

He was invited to participate in the recording of a CD where he performed electric and acoustic guitars, along with composer and jazz pianist Marcin Malinowski, in Warsaw, Poland. The entire CD was recorded live in the studio on the 26th and 27th Auguts 2008. Posteriorly, Mr Carrilho made recordings at the Frédéric Chopin University of Warsaw, the city where he also made presentations of his compositions and Brazilian Music (Bossa Nova) – a project with support from European Union.

Mr Carrilho was specially invited to perform and to record on the classical guitar a documentary with his arrangement “Hino Corinthians” for GAZETA-TV which was presented for all South America as a Tribute to the conquest of the FIFA World Cup Interclub 2012.
Among Mr Carrilho’s new works are his arrangement for Guitar Ensemble of Bachiana Brasileira N5 by Villa-Lobos and also his composition EVENTVM VI for Guitar Orchestra which will be premiered in 2015 by the Hong Kong Guitar Ensemble.
His CD “Classics of the Guitar”, recorded in 1998, has been considered a great tribute and reference for the classical guitar repertoire recordings and performances.

MAGAZINE GUITAR MUSIC
I have been, for a long time, a writer, an arranger and a transcriber of Guitarra Magazine with distribution all over in Japan, USA, South America and Portugal.
There also is represented my column “History of the guitar and its evolution”.
I still wrote and write for magazine Guitar Pro, where there published my composing, arrangements and articles about guitar music.

I present to you on my page sheet music of my music and arrangements!
Please, see my videos for clarity.

Some web links you can find informations and news about my works:

Have a nice day!

The Last Supper (A Última Ceia)

The Awakening of the Angel (Despertar do Anjo)

In My Place (Em Meu Lugar)

All guitar arrangements by the author Fred Carrilho (10)